Relationships are hard, without additional worries or health issues. So when you add something like Crohn’s disease into the mix, things can get a even more complicated. So whether your in a relationship with a Crohn’s sufferer, or are living with your own diagnosis. I want to share our journey, so far, in hope it might help someone else.

Even if your neither of the above, please continue reading and share. This is a disease that many people suffer with & starting the conversation, might just help someone you know.

This is a post that I’ve thought about sharing for a while. I first wrote this post and gave it to my boyfriend, thankfully, he loved it. So before you read this, I just want to say… I am aware that what my partner goes through & has to deal with, is much more important/scary, than how it makes me feel. But, Crohn’s is something which affects almost every aspect of his life. I am one of those aspects.

I appreciate that this may sound like I’m being self centred, talking about  how it affects me or our relationship. But dealing with Crohn’s, as an on-looker, or watching the person you love suffer, does affect your feelings, thoughts and your general day to day.

So, I thought I would share our story so far and if there is anyone out there in the same position, hopefully this will show you, it’s ok to feel the way you feel. If you have Crohn’s and find it difficult to understand the feelings of people around you, or you think your condition is straining your relationships. Then I hope that this can give you a small insight into how it can feel, for those who really do love you.

Since I met my beautiful other half, Crohn’s has been a part of my life. I knew my partner before we became a couple, so I already knew of his condition. I would be lying if I said I was always completely fine with it.

In the early stages of our relationship, I researched it a lot. I needed to know what it was, how it affects people, whether it has an impact on life expectancy & would it affect any potential future children. I know that this is a lot to think about, when your only on your 3rd date. But it’s at that point, I knew I had to make a choice, is it something I can take on.. or not? I chose him & I am so glad I did.

My boyfriend and I have been together for 4 years and I’ve seen quite a lot of what this disease can do to a person. I know I haven’t seen it at its worse yet (and if i’m honest, i’m thankful for that). But this is something that I know is there, in the back of my mind, that it can change our lives whenever it chooses.

For as much as I love my partner, he isn’t the best communicator (sorry but … like most men) so it can be really difficult to try and understand his thoughts & feelings. Especially during a flare, or when he’s feeling fatigued/low. I know he keeps things to himself, to not worry me. I also know, he probably has more pains / flares than he actually mentions. Which if I’m honest, can be really frustrating. He might feel he’s protecting me, but I know him, I know when he isn’t telling me something. It can be frustrating, knowing he isn’t telling me the truth. This type of miscommunication can sometimes lead to bickering & misunderstandings.

This is something we eventually spoke about, which I think really helped us move forward.

Peanut = cramps, stomach is off, small amount of pain.

I know this may seem a bit strange or silly, but this has given us a simple & clear way of communicating. When he is going through a flare telling me which nut stage we’re at, has stopped me from overthinking & worrying too much. It also means we don’t need a big discussion about every single symptom he’s feeling. (which I know he prefers too!)

Along with the flares Crohns can come with other issue too; migraines, fatigue, temperature issues, fluctuating weight, mouth / internal ulcers & tricky bathroom habits. All of which can affect my boyfriend day to day. In the beginning  of our relationship I could get frustrated (even annoyed) because I didn’t understand. Sometimes I have to be ok that he needs a day in bed, or misses plans because he has a migraine or is feeling fatigued. It isn’t something he can help & I have to remind myself of that.

The one thing that I have found difficult about loving Ashley & his Crohn’s, is the lack of control (especially for a control freak like me). I know that, as a couple, we may have some difficult times ahead.

I now know that when a flare happens, it knocks my boyfriend of his feet. (The longest so far, was for around 5 days) I knew I needed to carry on as normal, but it is hard to resist the urge, to not just get into bed with them. It can feel like your right hand is missing & it’s hard to not worry about leaving them alone too. I’ve come to realise, that all these thoughts are normal. I love him, so I am obviously going to worry or get upset. The most important thing I’ve learnt, is to find a healthy way of getting these worries off my chest & making sure I don’t put all my worries, back onto my partner.

When Ashley is going through a flare, it can be too easy to want to mother them. Sometimes, fussing around my boyfriend & telling him what he can and can’t do, may feel (to me) that I’m helping. But what I’ve realised is that I need to make sure I remain his partner & not his mother.

Although its hard, I often have to resist telling him what I think he should do & give him more credit. He obviously knows his own body better than I do.

It can be hard not being able to ‘fix it’ / make it all better. I know in my heart I wont ever be able to make everything better, but I can I deal with it the best way possible! Instead of being a bossy matron, I need to just be there for him. Be supportive and allow my partner his space to recover.

Thankfully we have a great support system around us who, as we both know, would be there if we needed them. I’ve come to realise that this is the best way for me to deal with things, I talk to my friends & family about the way I feel a lot, especially when he isn’t well. This means I try not to put any of my fear, frustration or anger onto my partner. (This has taken a while to get right!)

It took a while for me to feel ok about sharing my thought & feelings on my boyfriends Crohn’s. I know that what he is going through, is so much harder than me being the bystander, but that doesn’t mean it isn’t hard. Trust me when I say, It’s important for anyone who is in a relationship with a Crohn’s sufferer, that you take time to deal with your own feelings and worries. Make sure you don’t let things get to you (it is really easy to do) as you’re the one who will need to be strong and supportive, when they cant be.

According to Crohn’s & Colitis UK, there are around 115,000 people around the UK diagnosed with Crohn’s. So I know there must be plenty of people who feel the way I do but maybe haven’t spoke about it openly, or might not want to talk about it.

I understand, that as the one of us who doesn’t have Crohn’s, people may find it difficult to see why I would struggle with anything! I guess its one of those things, where you have to be in the situation to fully understand it.

Crohn’s is the type of condition which can really affect the person who is diagnosed. I don’t know what it must be like, for your life to randomly change one day & have a condition that you know will affect your life going forward.

What I do know, is that Crohn’s didn’t affect my choice when it came to loving my boyfriend. It is something that we deal with. But we deal with it, together. We talk about it openly & I encourage him to talk as much as he wants. Which I think really helps my boyfriend (more than he would probably admit)

When it comes to health, it can be easy to push people away . It is sometimes easier than letting people in. But I also know from the many arguments & tears we’ve had so far, that when we communicate and share our worries, we deal with things in a much healthier way. Which lets us take back the control from Crohn’s in our relationship. 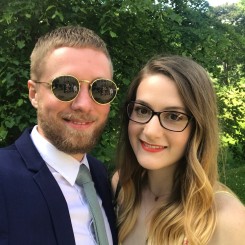 If you have read this and think you might want some additional support or information then please visit the Crohn’s & Colitis uk.

If anyone has any questions which they would even like to ask me or my boyfriend, please feel free to message me on here, or DM on the  Daisy Grey Twitter & Instagram.